Fashion Around the World

street fashion around the world...

People seem not to see that their opinion of the world is also a confession of their character. Ralph Waldo Emerson (1803 -1882) ♥

Style Feature:
Fall Season Colors for Nails
Polish your hands with a hint of Fall. Fashionable and trendy colors for this Fall include

Our 10 Tip-Top Nail Polish Colors for 2010: Daniel Jacobs
Let's just say we're not a French tips sort of bunch. Instead, we're always looking for fresh inspiration to shake up our nail routine. In fact, we turned to the runways--and to some local experts--to draw up our newest line-up of shades to obsess for the coming spring. Statue-of-Liberty green, bright persimmon, and confetti-like gold, are just a few of the swatches we're adding to your list. As nail aficionado Regine Berthelot of Caudalíe Vinotherapie Spa at The Plaza adds, "people are getting really excited about humungous sparkles, and Deborah Lippmann's Happy Birthday has become the most requested shade alongside NARS' Blue Lagoon. We are also seeing loads of bold, opaque liquid metallic shades." To discover more tippy-top shades, just snap your fingers...and click here! Check it out at : Refinery 29.com

Check it out at: http://www.refinery29.com/everywhere/trends/
Helping a Cause:

Tweet for Charity | Pledge to WiN: Domestic Violence Angel Wings
Amy Nix, fashion industry pioneer and jewelry designer, launched nix&stones in 2008. From the beginning, her motivation was to empower women and to inspire them to find their spirit by seizing every moment. As her unique vision and jewelry designs matured, nix&stones began attracting attention from boutiques and celebs nationwide. One particularly popular piece was the signature, stone-embellished Angel Wings.
As her business continued to grow, Amy remained active in supporting a cause she strongly believed in, domestic violence awareness and prevention. Sadly, many victims of domestic violence become trapped in a vicious circle. Though these women desperately want to leave their abusive partners, the lack of a stable job and a safe place to escape to, and fear for themselves and their children makes it extremely difficult for many women to get out of abusive relationships.
In 2010, Amy's family relocated to Leawood, Kansas and as fate would have it, she quickly established a friendship with someone involved in a local battered women's shelter. As Amy became more intimately familiar with how the organization operates, she realized she was now in a position to help more than ever before. She decided to create a special "Domestic Violence Angel Wing" and to give the proceeds to the halfway house. Amy's remarkable generosity didn't stop there- she took it one step further.
Many victims are not fortunate enough to have the means to escape the circle of violence, and feel helpless to escape on their own. So Amy made a proposal to the board to create the very first workshop where she could teach her friends in need how to build the angel wings. Building self-confidence is the first step to helping victims of domestic violence break the cycle. By helping to build the very wings that aid the battered women's shelter, domestic violence victims would be empowered to aid fellow women- and themselves- escape the cycle of domestic violence.
Today, Amy continues to teach these inspiring women the trade of jewelry making to deliver them from the cycle and to help them learn to channel their pain into a sense of empowerment. Women who have participated in Amy's program are grateful for the healing power of artistic involvement and its help in soothing their emotional state. Creating the angel wings truly helps to lift their spirits.
The chance to earn an independent income is the only opportunity for families who have been victims of domestic violence to get back on their feet, and with only 90 days to stay in the battered women's shelter, finding permanent employment can be difficult. To help, Amy has opened up her business to employ normal woman who have undergone these turmoiled circumstances.
Domestic violence is real problem that could affect anyone. Amy stressed that women who have experienced domestic violence are in no way abnormal- they could be your friend or neighbor. Through her program, Amy helps to remove the taboos and the shame sometimes associated with the victims and empowers them to see the beauty in their futures and emgerge from the pain.
Amy wants to expand the program beyond her company and help to establish these programs with other companies as well. We are asking for silent pledges to the charity Amy supports; in exchange the highest bidder will receive a pair of angel wings. Please Tweet this post @POSHGLAM, and email:Kimberly@POSHGLAM.com with "Domestic Violence Angel Wings" in the subject and your name, number, photo, address and pledge. The Domestic Violence Angel Wings retail for $88, so the silent bidding starts at $88, the winner will be announced via twitter. (www.poshglam.com)
Cancion Del Dia: Stereo Love 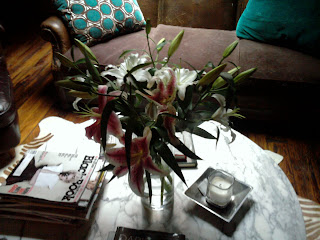 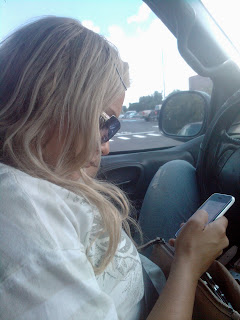