LookBook- Fashion Around the World

A woman's best friend; beauty in the most extremes. Heels have become a symbol for women to show their feline side but what you must go through to withstand the heels. Available now foot cushions to adjust to the long hours of heels but are they really healthy? They may not be as comfortable but they sure do look great. From the various styles the designers have created they are truly masterpieces of their own. Which brings me to this article that I found on yahoo today. Dangers of todays trendy heels. 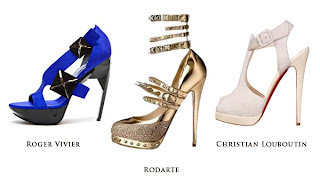 Can you even imagine trying to walk in these new Yves Saint Laurent slingbacks? Yikes.

If you’ve browsed a shoe department lately, you may have noticed that high heels are growing—and not just in popularity. Towering platforms, extreme wedges, and treacherous stilettos have flooded the marketplace in recent months, and most every designer and celebrity seems to be doing their part to participate in the trend. Runways, red carpets, and glossy magazine spreads have all been inundated with the look. Ever the style catalyst, Lady Gaga donned Alexander McQueen’s 12-inch heels in her "Bad Romance" music video after three professional runway models refused to wear them on the runway last fall. This past weekend, even Tina Fey, the queen of nerd chic, strutted out in five-inch pumps to perform her opening monologue on "Saturday Night Live." Clearly, we have a fashion craze on our hands, or, um, feet.
So why the sudden (literal) footwear rise? Experts say the recession is to blame: "We have entered a moment of heightened impracticality in footwear," Elizabeth Semmelhack, author of "Heights of Fashion: A History of the Elevated Shoe" told CNN. "Heel heights noticeably grew during the Great Depression of the 1930s, the oil crisis in the 1970s, and when the dotcom bubble burst in the 2000s." Women's shoes are now at an all-time high, and Semmelhack believes during tough economic times, there's "a greater need for escapism."
However, this escapism isn't without its hazards: "There is never a shortage of high-heeled women in pain in my midtown Manhattan office, but yes, there is an increase lately," says Dr. Jacqueline Sutera, Doctor of Podiatric medicine and surgery and spokesperson for the American Podiatric Medical Association says. Popular Manhattan podiatrist Dr. Rock Positano, Director of the Non-surgical Foot and Ankle Center at the from the Hospital for Special Surgery, agrees, "We are seeing a dramatic increase in problems of this nature that are directly related to abnormal or altered foot and ankle mechanics."
Sutera explains that any shoe with more than a two-inch heel can be dangerous, though certain styles are better than others—like wedges, which are safer because your weight is distributed across a greater surface area. Minimal use is also key: "What I do, and recommend to my patients, is to wear [heels] when I get to my office, or event," says Sutera. "And then wear a commuter shoe to and from [where you're going]."  As for those of us who love to wear a pair of sexy high heels out dancing, Positano strongly advises against it: “I have termed an injury known as the 'Gloria Gaynor fracture,' which is best described as an injury sustained during fast dancing while wearing high heels. The combination of fast dancing, a very high heel, and maybe a libation or two can lead to a potentially dangerous situation."
Women who are overweight, have arthritis, or have high or flat arches, will experience more frequent foot and ankle problems (most common are tendon and muscle strains, hammertoes, bunions, and stress fractures—though long-term high heel wearers could suffer from tendinitis, severe ankle sprains, and torn ligaments and tendons), but many women encounter symptoms after extended high-heel wear. "Pain is your body's way of warning you that something is wrong, you should stop wearing the shoes" says Sutera.
Obviously no one expects that women will stop dressing up in heels altogether, but if you limit the amount of wear time and the heel's height you’re, um, taking a step in the right direction. The doctors we spoke with also recommend: Massaging your feet and rolling them over a golf ball or ice when you take off your shoes at night and gripping a towel and holding your foot up for 15 seconds, three times a day, can also help strengthen the intrinsic muscles of the feet.  [CNN][NY Mag] Strut your stuff. But be very careful.
In Rememberance of Alexander McQueen 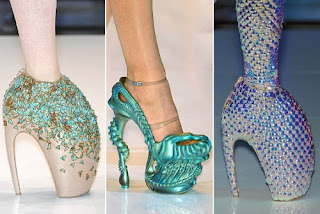 Song of the Day: Nancy Sinatra -Boots were made for walking
Nos Vemos Fashionistas! 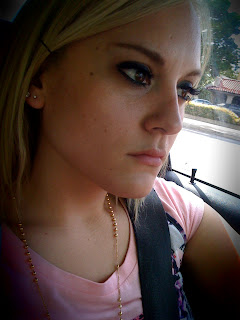